When I began writing I craved feedback. I wanted to find out whether my writing was good enough to go the next step or an enjoyable past time.

I attended a Writer’s Workshop in Port Hedland hoping no-one I knew attended.  The presenter, the lovely, talented Marlish Glorie, (author of Sea Dog Hotel and The Bookshop on Jacaranda Street), saw potential. It was the confidence I needed to continue my writing for others. I submitted my first Picture Book manuscript to Kids Book Review competition and waited.

The email came back, I wasn’t a winner but the feedback was good, better than I expected. The assessor even wrote LOVED in capital letters.

This was it, I am a writer, I am going to write. I wrote articles to magazines, wrote about electrical goods, submitted to any competition I could find, joined many online writing networks as a regular contributor, began a Facebook page, Twitter account, Instagram and Pinterest. I wrote about anything and everything, no focus, no goal I just wrote.

A year later I submitted again to Kids Book Review, if I received 38.5 out of 50 last time then surely with all the writing I had been doing I would have improved. I neglected to think about the manuscript I had sent in didn’t have the year of passion, commitment and thought placed into it like the previous year’s.

I thought long and hard. It was my wake up call.

I learnt to be a writer you need to be, focussed, passionate, committed, thick skinned, and proud.

I became focussed, I spent a lot of time deciding why I wanted to write and what I wanted to achieve from my writing. I only kept writing networks which met my goal and personality.

I stay committed to my writing goal, not allowing myself to be side-tracked by online writing opportunities.

I have become thick-skinned (well sort of) I found an editor who was honest and whom I respected. I continually research, learn and write to improve my skills.

I have pride in my work, knowing that whenever I publish anything, even the 140 characters on twitter, it is to the best of my current ability.

Am I a good writer? Who really knows.

Am I a passionate writer with a clear focus on my goal, ‘Developing children’s reading and writing skills, through stages not ages?’ Yes.

Have you ever received feedback which made you stop and think? Feel free to share below, the good the bad and the brutal.

Book Week is amongst us and there are schools around Australia enthralled with the Children’s Book Council of Australia awards books.

Last Friday while we were  congratulating the winners, some Australian authors, illustrators and publishers were planning their book for the next year’s awards.

After attending Jane Parsons’ presentation and writing the article, ‘Judging the Judges’ I was left with some fascinating statistics which I thought I would share.

Or if you prefer a pie chart

I will leave it up to you, the reader, the writer, the book enthusiasts to analyse the main themes in each of the categories.

The Children’s Book Council of Australia awards could not continue without the final two groups which I have to mention. 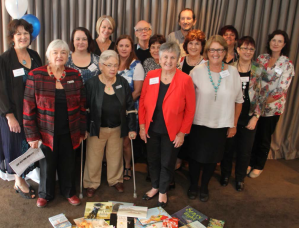 Seventy years ago when CBCA awards began, the winners received a handshake for males and a camellia for females. Government funding supported the awards from 1966-1988. This changed to commercial sponsorship. At the end of 1995 CBCA set up an Awards Foundation in the aim of collecting $1 000 000 to support the Awards prizes.

Thanks to the Judges, the sponsors, the publishers, the authors, the illustrators and of course us readers who enjoy books in all shapes and sizes.

Feel free to share your thoughts on this year’s CBCA winners.

Thank you to Jane Parsons for allowing me to use your presentation statistics in my post, all other information directly from CBCA website.

Tagged as Australian, authors, Book of the Year Awards, Books Light Up Our World

I attended a presentation at my local library by Children’s Book Council of Australia judge, Jane Parsons.

I went with the intention of writing about the presentation. I had pen and notepad ready, however what I didn’t have was a focus. I could write about the shortlisted books, the process, the awards, the statistics, the themes, the illustrations, the list could go on.

Within minutes I was mesmerised by Jane’s descriptive language for each of the shortlisted books and the notables. I could hear the passion in her voice for not only books but her want for others to be enlightened by books.

Her language was so powerful that if she had reviewed, a Dog Grooming book I would have run out and bought it…..even though I don’t own a dog. Thanks to Jane I have many, many more books on my to-read pile.

I loved her idea that the notables should be released first to give them a ‘chance to shine’.

But who was this Jane Parsons and the other seven judges?

Why should authors, illustrators or publishers pay the $100 entry fee and provide copies of their book for the judging panel?

Why should Australian readers trust their judgement?

This is what interested me. I had listened to the introduction about Jane however was side-tracked with our mutual experience of working in a remote Indigenous community.

I sought answers, and I wasn’t surprised when I read the profiles in Reading Time (http://readingtime.com.au/judges-views/) of the seven other judges and their passion in books, which shined through.

Noting the experience of the judging panel I was surprised that there weren’t more emerging writers or published authors in the audience. From my observations most were Primary School Teachers, although they too could have an interest in writing professionally.

Jane Parsons and the other members of the judging panel had read and written a report on 400 books and  read each judging panel member’s report.

After writing 400 reports and reading 2800 reports they attended a Judge’s Conference. There they discussed in length the top 30 books in each category and chose notables, short listed and winners.

Imagine as an emerging writer being able to tap into this knowledge. Hear what makes a notable book and see where the enthusiasm for each book lies.

Whether you are a teacher, parent, an emerging writer, illustrator or author,

if you could ask a CBCA judge a question, what would you ask them?

I look forward to hearing the winners announced on August 21st and wish all shortlisted authors, illustrators and publishers the best of luck.

My boys loved reading all the Early Childhood shortlisted books, we wonder who will win.

There are more posts planned for Book Week and the CBCA winner, so please follow to keep updated.

There are many quotes about celebrating the small steps.

There is no one giant step that does it, it’s a lot of little steps. (Peter A Cohen)

While working to attain your goal, don’t forget to pause and celebrate the little victories along the way. (Unknown)

Don’t wait until you’ve reached your goal to be proud of yourself. Be proud of every step you take toward reaching your goal. (Unknown)

My first celebration was the first time I saw my name in print. I popped the champagne cork, rang my Aunty in Queensland and ordered three copies (one of which my mum still displays on her fridge).

Yep, I was published. Okay it was in a community magazine and yes it was only one sentence with one photo.

I wasn’t expecting my first step to be a published author visiting schools and libraries around Australia, after all I would have looked silly if I had a That’s Life magazine to show for my effort.

But this first step gave me a sense of belief in myself. Even though it was only an image and quote in a That’s Life magazine, there was someone out there who had read what I had written and liked it enough to be published.

My words, my picture, my name.

Seeing my words, my picture and my name, gave me the confidence to begin sharing my writing with others. Who knows where my writing would be if I hadn’t celebrated the first step and shared my success with others. It could still be locked away in notebooks, tucked under my bed.

Whatever your first success is, celebrate it, enjoy the fact that you are moving forward.

Your first success towards becoming a writer could be:

“Success comes in a variety of sizes. Celebrate them all, no matter how small.” Jenny Graham

Feel free to share below your first success no matter how big or small and we will celebrate with you.